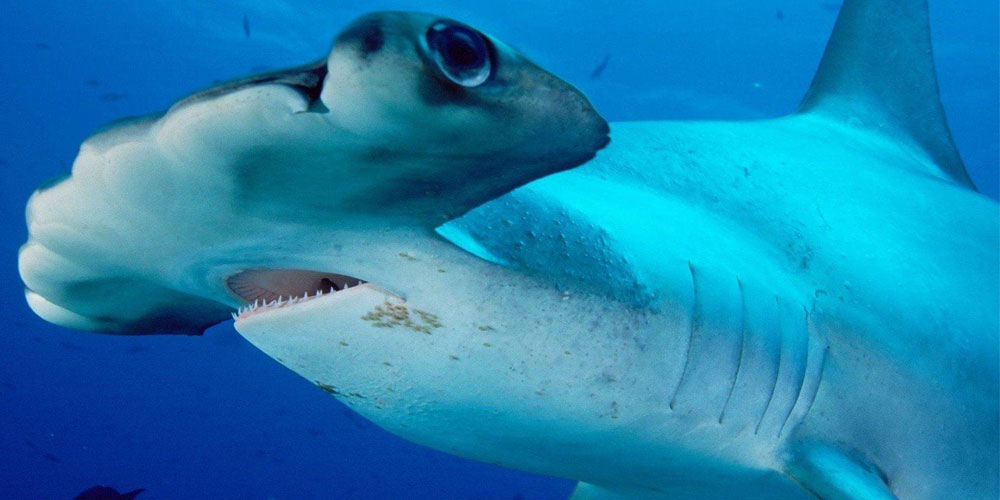 Great White Sharks and their relatives like the Mako Shark and the Thresher shark, are warm blooded.

The largest shark, the whale shark is harmless and will allow scuba divers to hitch rides by hanging onto their fins.

The teeth of a whale shark is no bigger than a match head.

Lantern sharks can glow in the dark.

Cookiecutter sharks cuts out oval-shaped chunks of flesh from large fish, seals, whales and dolphins. They form a suction cup with their lips, bites, then swivels around to take a plug of flesh, leaving its prey with a round hole in its body.

Shark teeth were used on brass knuckles, with the teeth pointing outwards on the knuckle.

Shark skin has been used for leather after removing the denticles. In Ancient times, this has been used to make shoes, belts and drums.

Some sharks are scared away by bubbles produced by scuba divers.

Lemon sharks are the easiest sharks to study since they do not mind being handled and do not need to swim to breathe.

Most of the fish sold in British fish-and-chip shops are from spiny dogfish, one of the most abundant and heavily fished kinds of shark.

Shark oil is used in costly skin creams that are meant to prevent wrinkles and signs of aging.

Sharks kept in captivity have been known to grow 10 times their usual rate in the wild.

The teeth of a tiger shark are strong enough to crunch through a turtle’s bones and shell.

Boat Builders in some parts of Africa rub the wood of a new craft with hammerhead oil in the belief that it will ensure fair winds and successful voyages.

Apart from people, a shark’s greatest enemy is another shark. Most sharks will happily eat any of their relatives, including members of their own species.

With Gray nurse sharks, the first pup (baby shark) to develop consumes its siblings as they hatch.

After mating, some female sharks can retain the male’s sperm in their bodies for use when she is ready to reproduce, even if that does not happen until next season.

Nurse sharks in captivity has been trained to push buttons with their snouts.

Game fisherman often release sharks after they catch them, but most sharks are so worn out from the lengthy struggle that they die anyway.

Up to 100 million sharks are killed by people every year.

Extracts from a shark’s gall bladder are used in the treatment of both eye cataracts and acne.

In 17th century France, shark brain was eaten to ease the pain of child birth. Today, the capacity of dried shark brain to relieve pain is widely recognized.